The opera The Maids (Jungfrurna) is based on Jean Genet’s play Les Bonnes. It received rave reviews in both national and international press at its premiere in March 1994, and has since then established itself in the repertoire with, for a modern opera, an unusal number of productions worldwide. The Maids is the most internationally produced Swedish opera in history.

I got the idea when I at age 14 saw an English television production of the play, featuring Glenda Jackson as Solange and Susannah York as Claire. It was of course the 1975 film production by Christopher Miles. The play mesmerised me. I remember thinking, “if I ever become a composer, then I will turn this into an opera”.

In retrospect, what attracted me was the element of artificiality, sham and dissemblance, of dissolution of identities and the ritualistic heightening of the dramatic situation — something which in an almost ideal manner provides a viable solution to the central crux of contemporary music drama: Why the hell are they singing?

In The Maids, the characters sing during the death-game, and when reality is suspended, twisted or otherwise heightened. When the two sisters are by themselves, as themselves, they speak, frequently in the form of melodrama, that is, with orchestral accompaniment. There is no attempt at realism — in my opinion an utter impossibility on stage, and especially so in opera.

And as for the commonly emoted sentimental notion that singing is what brings us closest to the human soul I simply say: bullshit. Singing is heightened reality. It isn’t real.

It would take 20 years, but I did follow through on my decision: eventually, The Maids was commissioned by the Royal Opera of Stockholm and received its premiere there in 1994.

Two sisters, Claire and Solange, serve Madame as chamber-maids. When Madame is away at night, the two sisters take turns at playing a bizarre game in which one of them dresses up in Madame’s clothes and accessories and, in a sadistic power-play, makes herself the target of the unspoken, suppressed hatred which exists between mistress and servant. The purpose of the game is to drive the Maid to the only logical conclusion of the ritual game — that of killing Madame.

When the curtain rises, the sisters are occupied with one of their late-night rituals, a fact which the audience not necessarily will realise at first. Claire is playing the part of Madame and is humiliating Solange, who in turn is dressed up as Claire: so who is actually humiliating whom, and to what end?

The Maid is gradually egged on towards the inevitable murder, but just as the act is about to be consummated, an alarm clock rings. The sisters have set it so that they will have enough time to remove all traces of their game before Madame returns. We understand that Madame’s lover, Monsieur, is in prison due to false letters of accusation which the two sisters have sent to the police. We also come to realise that the two maids have tried to kill Madame in her sleep.

The telephone suddenly rings. It is Monsieur: he has just been released on bail due to lack of evidence and is waiting for Madame at a restaurant. The two sisters are struck by panic. They decide to poison Madame when she returns, but the attempted murder fails. Alone again, the two sisters play the game a final time — one of them carries the identification with Madame to its logical conclusion and herself drinks the poisoned tea.

The libretto was adapted from the play by Ragnar Lyth, who also directed the first production. Click here to read the libretto.

The Maids received its premiere at the Royal Swedish Opera in Stockholm in March, 1994. The work had been commissioned by its General Director, Eskil Hemberg, and was directed by Ragnar Lyth. The Maids at once became a great success, receiving high acclaim both in Swedish and international press.

With a total of five independent international productions, The Maids is one of the very few modern operas to have become established as part of the opera repertoire worldwide.

The Maids has received rave reviews from newspapers all over the world, including Opera World, The Times, The Wall Street Journal, Frankfurter Allgemeine and others:

Click here to see the full list of reviews. All press clippings can be translated on their respective pages.

I call it The Orchestra of Lies. The instrumentarium was selected to give the illusion of a much larger orchestra, and I’m using every orchestration trick in the book to make it so.

The reason for this is two-fold. First of all, dissemblance and role-playing is a central part of the drama, and the orchestra is very much role-playing in its quick assumption of various musical identities. Second, I was given the opportunity to write a chamber opera, but I needed the sound, and on occasion the brutality, of a full symphony orchestra.

So: what constitutes an “orchestral” sound, as opposed to the sound of a chamber orchestra? What produces the typical symphonic sound? Simple: strings, brass, and percussion. Said and done. Out went the woodwind section – it was replaced by a harmonium. A harp was essential in a score dealing with glamour and desolation, of course.

It worked, and indeed The Maids has mostly been played in large or very large auditoriums. I have stopped calling it a chamber opera; it’s an opera, pure and simple.

Contrary to what some commentators believe, there’s only one single quotation in The Maids: when Madame sings Such is love, Solange, I quote four bars from Bernard Herrmann’s music to Hitchcock’s Vertigo.

Apart from this, there are no quotations in the score to The Maids whatsoever.

For more about the reasons for this quotation and of how allusion works in The Maids, read this blog post.

The Maids was commissioned by The Royal Swedish Opera of Stockholm, where it received its premier production in 1994, directed by Ragnar Lyth.

The Maids was repeated at the Stockholm Opera during the Spring of 1996, again with the original cast: Anna Eklund-Tarantino as Claire, Eva Pilat as Solange, and Gunilla Söderström as Madame, under the musical direction of Niklas Willén. The Maids was also recorded on CD.

Theater Vorpommern in Stralsund, Germany, became interested in The Maids, partly because of a review in Frankfurter Allgemeine, and decided to produce the work in German, with Madame sung by a bass. The production opened on May 3, 1996, conducted by Ekkehard Klemm.

The Maids was also selected to inaugurate the newly formed opera company of Angers-Nantes in 2003, together with Britten’s Turn of the Screw. It was repeated in 2004, this time without the Britten piece.

All productions after the Stockholm ones happened without any promotion. The rave reviews and the internet spread the word; and in one case the director of the Cincinnati production, Nicholas Muni, saw the Nantes production and decided to stage it at the Cincinnati Opera, second oldest opera company in the USA.

The Maids was recorded on CD by Phono Suecia in 1996, in connection with the second production period at the Royal Opera of Stockholm, with the original cast, conductor and orchestra: 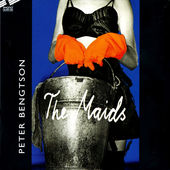 The Maids is available on iTunes and on Spotify.

The record number is Phono Suecia PSCD-96. Should your dealer not have it in stock, it can be ordered online from Swedish Music Information Centre.

The score, all instrumental parts, and the piano reduction are available for purchase or rental from Swedish Music Information Centre, +46-8-783 88 00. Ask for Susanne Suttner.